GET TO KNOW THE IRON MEN OF ROCK AND ROLL…

WE ARE TWISTED…SISTER! – A FILM BY ANDREW HORN

“‘W.A.T.F.S.’ is one of the most surprising movies I have seen in quite some time.(…) a film for everyone, not just fans, one which [imparts] a deeper understanding of and respect for the men who lived it.”
– Pamela Glasner, Huffington Post

“ fascinating (…) a comprehensive and sometimes harrowing portrayal of the grind a working bar band in the 1970s had to endure to get by.”
– Glenn Kenny, NY Times

“I’m not a Twisted Sister fan and, in fact, knew very little about their scene in general—but this is a fascinating documentary.”
– David Hudson, Fandor.com 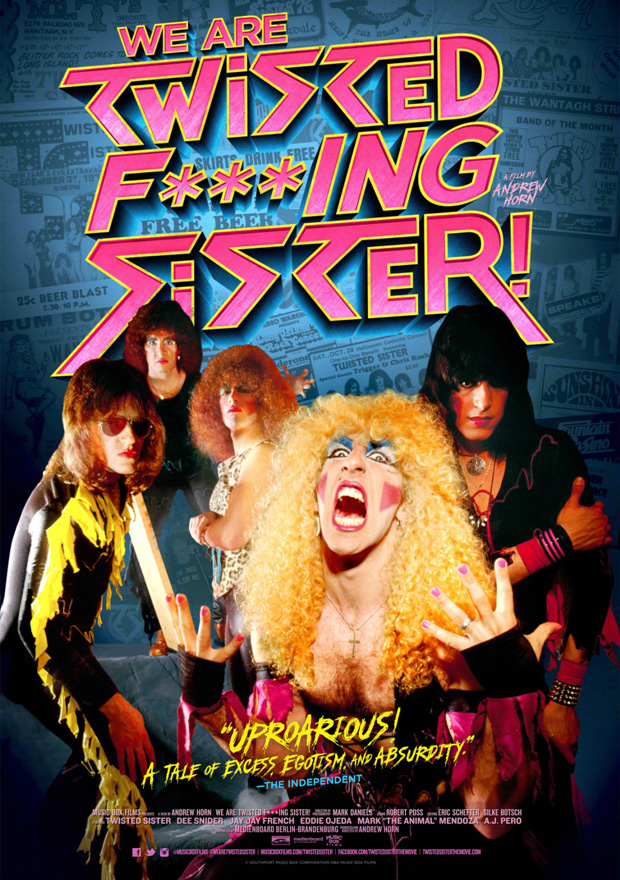 They were the Grand Funk of Glam and the NY Dolls of Metal. Some considered Twisted Sister a joke, but others called them the greatest bar band in the world. While the microcosm of Punk/New Wave was being born in Manhattan, Twisted Sister was battling their way to the top of a working class, suburban, cover-band bar scene that boasted monster clubs, attracting audiences of up to 3-5000 a night – a scene that surrounded NYC in a 100 mile radius, yet existed in a parallel universe. Twisted was channeling youthful fury, and a wicked sense of humor, into a sort of blue collar performance art, both sustained by, and trapped in, the “velvet noose” of suburban bar-band superstardom.

If you think you know them from their hit songs, the MTV videos and massive stadium shows, this is the untold story of how they became that band – full of strange, and often hilarious, twists and turns. It’s about Rock ‘n Roll and the business of Rock ‘n Roll. It’s about perseverance and things blowing up in your face. It’s about finding yourself, finding your audience and doing literally anything, however wild, to connect with them. A mesmerizing, and wickedly funny story of a 10 year odyssey to overnight success.

Are you ready to really get to know Twisted F***ing Sister?

Visit the official ‘We Are Twisted F***ing Sister’ web site.

MUSIC FROM THE FILM

‘We Are Twisted F*cking Sister’ contains a ton of early TS originals, as well as cover tunes from the Club Daze. Here’s a list of the music from the film, along with links to buy the MP3s and CDs.

‘What You Don’t Know (Sure Can Hurt You)’

The above songs originally appeared on the ‘Under The Blade’ LP.

Can’t Stand Still For A Minute

You Know I Cry

The above songs originally appeared on the ‘Club Daze Vol. 1’ CD.

Cover Tunes: There are a number of cover tunes in the film as well. We’ve linked to recordings of TS playing them where we could find them – and when we couldn’t find TS recordings, we’ve included links to the original artists.