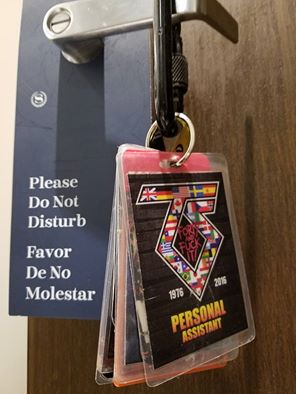 So this is how it ends.

When I wrote that very first road report—a deliriously excited story about my trek to what to me seemed like the far reaches of the universe—New Jersey—I never imagined that there would be another show, let alone another decade plus a few extra years. I remember that day as if it were yesterday—I was so terrified. Driving 3 hours by myself, to a place that may as well have been Bora Bora, to see one of the first shows of Twisted Sister’s reunion.

I only cared about one thing—getting to that front barricade as fast as possible. When I arrived at Six Flags, I remember asking the teenager at the front gate box office: “Is this where Twisted Sister is playing?” She dully nodded and slid an amusement park map under the partition. I wouldn’t leave. “Are you SURE?” “THE Twisted Sister? The band from the 80’s? Dee Snider?”

It was July 5, 2003 and absolutely oppressively hot. As I made my way to the entrance gate, I passed several scruffy-looking long-haired types who cat-called “TWIS-TED SIS-TER!” at me. I cringed, thinking I was back in high school and braced for a battle at the worst, or some other unpleasantness at the very least. To my relief they just kept walking, and judging by the laminates hanging down, they were road crew.

There were about four other fans in line, and we had six hours to kill in the burning sun until the gates opened. As fate would have it, the fan in line next to me was SMF Cyndi and Brian “MetalNY” from this very Slamboard. We spent every minute of those six hours talking Twisted—up until that moment, I had not met another fan who loved Twisted Sister as much as I had.

The show itself was pure magic—all five original members in full makeup–I was elated from the opening riff of “Long Way To the Top” all the way to the end of the show when “Day of the Rocker” told us it was time to go home. I remember making it home at 2:00 a.m., crawling into bed next to now my ex-wife, and telling her that my life could not possibly get any better than what I experienced that night., as tears rolled down my cheeks.

How wrong I was!

The Bent Brother shows came next—and more Armadillo Road Reports—and each time I went to a show, I met more S.M.F.s from the Slamboard, and built a small community of S.M.F. friends. Response to the road reports was so positive, that when fans started to message me, asking me if I would go to the show because “it was the next best thing to being there,” I suddenly realized that I had a purpose in life—to share the Twisted Sister experience with fans, and be an ambassador for heavy metal.

The traveling began. I soon overcame the fear of flying alone and armed with stacks of maps under one arm and a notepad in the other, I attended shows in 19 different U.S. states plus Canada, becoming a staple in the front row, stage right, just between Jay Jay and Eddie.

By 2009, after the Christmas shows had run their course, it was becoming more and more apparent that domestic concerts were disappearing as the demand for Twisted Sister to headline festivals overseas increased. There was only one thing left to do—and it terrified me to no end: Travel Internationally.

The story of my visit to South America is a chapter in and of itself—it was life changing in so many ways, that I barely remember or recognize the person who boarded the plane that Thanksgiving Day. I returned home from South America with new friends and new family, and the Armadillo Road Report began to take on a whole new angle—one from behind the scenes as the Road Report went from the Officially UNOFFICIAL Twisted Sister concert review to the Official Twisted Sister Tour Blog.

The next five years were a blur as I was offered an opportunity to apprentice on the road crew, and then eventually, land one of the highly coveted spots. I joined a brotherhood unlike anything I have ever experienced, and finally understood what Tour Manager Danny Stanton meant when he told me that I could “be a fan…or a friend,” but I had to “choose wisely because there was no going back.” There was one major catch—as an apprentice, I wouldn’t be paid and I’d have to travel on my own dime.

Here was the dream, at my fingertips. Hand the laminate back over to him and I’d be back on the rail, screaming and sweating with my fellow fans. I’d be back outside in the elements, pissing into soda bottles and yearning for that setlist or guitar pick to find its way into my hands. Clip the laminate onto my belt loop, cross over the barricade and enter into a world where my god-worship of Twisted Sister would almost certainly tarnish and my 90 minutes of bliss could morph into something else entirely. It was an enormous risk for a superfan, but a risk I gladly took.

No regrets on that decision. My only regrets are the shows I wasn’t able to attend.

I won’t discuss A.J.’s death here—it’s still remarkably painful to talk about. All I can say is that I became very close with A.J. and the road crew, and have to come to know the band members personally over the years. When you see your gods as mortal men, and love them even more—flaws and all—it’s a powerful force.

These past thirteen years have been an absolute thrill ride, and it’s been an honor to bring you all of the details you wanted to know, and plenty you didn’t! It was truly my pleasure to spend countless hours with you, my S.M.F. friends, in the heat, the snow, the ice, the rain, the cold and the mud. We shared a lot of laughs and a few too many tears. It had become more and more difficult to write these Road Reports—as my responsibilities increased, there wasn’t time to jot down observations about the show or witty quips about the venue. Suddenly, I was a part of the Twisted Sister organization and there was no time to blog. The demands of the road were such that finding a computer to post the setlist was definitely secondary to a hot shower and two hours of precious sleep before the next flight. I found myself writing less and less, except for one now conspicuously missing notorious blog entry that will go down in history as “the shit heard ‘round the world.”

For the past two years, I failed to see a single show start to finish. Most of the time, I was fortunate if I saw even half of the setlist performed. Twisted Sister became the background music while I loaded vans and retrieved equipment. My shows were occasionally stress-filled hours of running errands, escorting guests, folding towels, handling wardrobes, ordering catering, preparing transports, shuttling guitars and a million other remarkably uninteresting small duties that left me with muddy boots, blood-filled socks and truthfully, occasionally, feeling a bit depressed.

And now, it’s finally over.

I can only tell you that of the almost 100 shows in 20 countries I attended these past 13 years, Twisted Sister gave it everything they had, every single show, every single time. It didn’t matter if there were technical problems, horrible weather or sheer exhaustion from being up for 72 hours—our boys in pink and black left everything they had on that stage. Their professionalism and dedication to their craft never ceased to amaze me. After the devastating loss of their brother A.J., they played as if every show was their last.

And I thank YOU, my babies, my faithful readers …the fans …the S.M.F.s…the Sick Mutha Fucking Friends of Twisted Sister. I dedicated each and every blog entry to you. We are a special family of fans—no matter where I went in the world, Twisted Sister fans were always the best.

It has been a pleasure, an honor and the adventure of a lifetime.

This is Armadillo, trotting off for the last time.
Armadillo Terry